The Cruciform system provides, in one box, an effective method of relaying information about the dead and injured from the scene of an incident to the final destination.

The system can be used to sieve and/or sort victims and to mark the scene; it identifies records, personal possessions, associated child/close relatives and even separated body parts using a unique number/barcode number strip with numbered wrist band.

It can also be used by Victims Bureau staff or police liaison officers at hospitals and/or temporary facilities/body stores. It provides a verifiable link between victim and possessions, which may have been bagged for forensic examination in the event of contamination, explosive incident or other actual or potentially criminal acts. Fire service staff will find it useful for decontamination incidents where victims need to be unclothed and decontaminated and their bag of clothing and other possession identified. 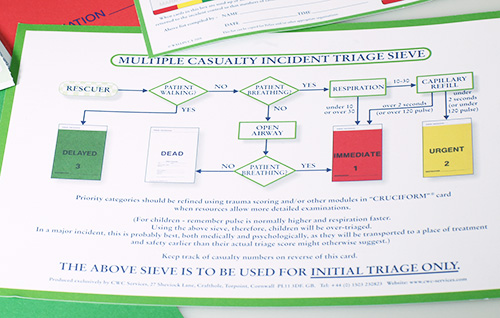 Triage usually begins with a process known as "sieving" or sorting casualties and victims in a particular incident. The Cruciform Triage Sieve card provides an at-a-glance reminder of the process for juniors, medics and volunteers that may be unfamiliar with the process.

This simple guide allows the rescuer to quickly sieve multiple victims into a logical order of priority so that the right resources can be brought to the scene to deal with the various victim categories. 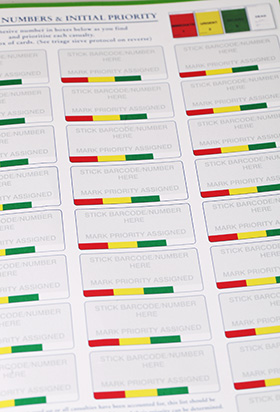 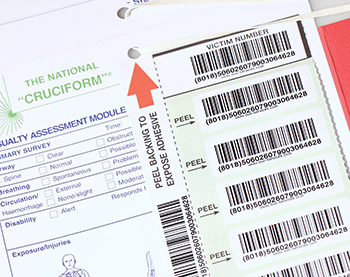 The Triage Sieve is designed for initial sieving / sorting of victims, typically at the scene. The reverse of the sieve card allows for quick collation of victim numbers and for initial priorities to be assigned.

Victims are given a barcoded wristband, which has the same GS1 barcode number as those affixed to the back of the Triage Sieve, Cruciform® card and to all amendable pages.

The initially determined triage category can of course be changed to a higher or lower priority as the victim's condition alters. Subsequent changes in priority will be determined by a more careful / qualified examination, possibly using the trauma scoring system (RTS) contained in the Cruciform® card.

Each Triage Sieve is designed for 25 victims.

The purpose of the "Cruciform"® Emergency Documentation System is to provide, in one box, a method of relaying information about the dead and injured, from the scene of an incident to the final destination. It can be used by any individual, rescuer organisation, or service involved in handling the victims, at the scene, during transportation or in hospital. The card can be used to sieve and/or to sort victims and to mark the scene, identify records, personal possessions, an associated child/close relative and even separated body parts. It is also usable by Victims Bureau staff or police liaison officers at hospitals and/or temporary facilities/body stores. It will provide a verifiable link between victim and possessions, which may have been bagged up for forensic examination in the event of contamination, explosive incident or other actual or potentially criminal acts. Fire service staff will find it useful for decontamination incidents where victims need to be unclothed and decontaminated and their bag of clothing and other possession identified.

The CBRN-E "Flags" will enable rescuers to "flag" up anyone who may have been contaminated by any of these agents so anyone dealing with that victim subsequently is made aware of a potential problem in treatment and/or handling.

The card is divided into several modules, and any one or any combination may be used for each victim, depending on the skill and training levels of the rescuers and the other circumstances prevailing at the time. The card is packed with the red panel showing so that the victims with the greatest perceived urgency for evacuation/transport or treatment can be identified and highlighted first. The Triage Sieve and Casualty Estimate document, also included in the box, can be used at a multiple victim incident to rapidly prioritise injured victims using medically valid assessment criteria. The colour/number module can also be used by the police or fire service personnel, to identify persons for evacuation to/from specified locations, even if uninjured or uncontaminated.

The box of cards should be kept available in a bulkhead locker, emergency box/case, patrol car boot or other convenient place. Boxes of cards kept in a locked store back at the base or other fixed location are of little use to the rescuer on scene. The cards should be used routinely. Routine use will ensure familiarity with the contents of each module and that, in the event of a larger scale incident, users are comfortable with the system.

The Cruciform® system should be introduced to colleagues in immediate care medical schemes, local authority emergency planning offices and other emergency services, including the military and air/sea/mountain rescue organisations. In that way, they too will understand how it works and how they could use or add to the information it contains. This joint use will enhance partnership working.

ACTION BY FIRST ATTENDER AT THE SCENE OF AN INCIDENT

ACTION BY FIRST ATTENDER AT THE SCENE OF A LARGER INCIDENT

Remember :- If there are no other rescuers or services present, the most important action is to provide the relevant control centre with information. First attenders/responders should not engage in rescue or life-saving activities until there are more rescuers on scene to assist.

Ignore the least injured and the dead at this stage (though they can be labelled if time permits.)

Do not waste time writing down anything on the card but apply the wrist band to link victims and card and take a numbered tag for your own records.

Utilise the Colour Module only. Writing information and/or making adjustments to priority colour can be undertaken later, when more rescuers are available.

It is important that the dead are labelled as early as possible, to prevent waste of medical time. As the scene is, forensically, a crime scene, the police may also wish to leave the dead in situ to take measurements or photographs, and a "dead" label will ensure that bodies are not unnecessarily disturbed. When the necessary information relating to the body has been filled in, the card can be sealed in its plastic sleeve. The police may also wish to use their own labelling system for the dead in addition to the Cruciform®.

Entering information on the card can be done without removing the card from the victims' neck. Push the plastic sleeve up and make whatever notes or alterations are necessary. Ensure that the sleeve is always replaced over the card to hold it together and protect it from inclement weather, blood, oil etc.

All persons involved with the victims may at a subsequent stage be called forward to give evidence, and it is vital that everyone is identified. This module gives a convenient place for that information to be written down. All persons have a legal obligation to HM Coroner (in the UK) to provide evidential continuity of the handling of a victim who dies, from its location at the incident through its recovery to the post mortem examination The unique number/bar code will also assist rescuers in identifying specific victims after the incident or to clarify which victim had gone to which destination.

Medical staff, offshore medics, nurses and paramedic ambulance or military staff will have no difficulty with this module, which will provide the receiving medical staff with a definitive and time based set of parameters specific to that victims' reaction to injury.

Seriously injured victims should have their trauma score checked on several occasions. TheTrauma Score Module allows this to be done on up to ten occasions. Ensure that the time each score was taken is recorded in the space provided.

The Trauma Score Module can be used to record oxygen saturation, if the necessary equipment is available to measure it, as well as changes to pulse rates and pupil reaction.

If the Trauma Score Module is used up, seal the card and put another onto the victim to continue trauma scoring.

Victims scoring consistently at 3 or below are least likely to survive, regardless of the degree of medical intervention they receive. If choices have to be made on which victims are to be conveyed or treated first, preference may be given to injured victims scoring 4 - 12.

Victims scoring consistently at 3 or less may be classed as "expectant" and identified visually by folding the corners of the green/delayed page in to show red "flashes" underneath. This will differentiate them from victims who are classed as green/delayed because their injuries are comparatively minor.

The green/delayed panel can also be used as follows:

Fold the green page in to show white "flashes" - for victims considered dead by rescuers but who need confirmation of death by legally qualified personnel.

Fold the green page in to show yellow "flashes" - for those uninjured victims, who may be infested, infected or contaminated and could benefit from specialised transport. These victims’ plastic sleeve should also be “flagged” using the appropriate CBRN-E stickers.

Use the Additional Observations/Treatment given/Comments Module provided to document any additional information not catered for elsewhere, for example, known or suspected medical conditions, personal effects, suspected contaminant (plus action taken to alleviate) or next of kin etc.